Hello my fellow little munchkins. How are you all doing? I am doing fine. I am back to school sadly after break. I really was enjoying all the time to get ahead in everything and also you know getting some sleep felt nice.

According to GoodReads, “If you fall asleep within a twenty-mile radius of Twisted Pines without a dreamcatcher, chances are you’ll never wake up. The locals call it the sleeping death, doctors usually call it altitude-induced cardiac arrest, but it doesn’t matter, it’s still a one-way ticket to the afterlife.

Liz Lawson always slept under a dreamcatcher. She even had one hanging from the rearview mirror of her Jeep, just to be on the safe side. She had no idea where it ended up the night she hit the moose, but for the first time she didn’t need it. Shawn Ericson, a gorgeous stranger, saved Liz from the monster trying to kill her in her dream, and changed her life forever.

Shawn said Liz wouldn’t remember the dream, but Liz always remembered hers. When Liz found out Shawn was a Knight Flyer and part of a super-secret group whose mission was to save people from the monsters plaguing their dreams, she wanted to know why he kept invading her dreams and why she was the only non-knight who remembers them.
The last few months of her junior year of high school are anything but boring as Liz battles the monsters in her dreams, learns she isn’t a typical sixteen-year-old, and deals with high school drama.”

The plot was very different from the standard book. It takes place between reality and the mind. When the mind is asleep. You know, Dreaming. Don’t we all just love dreaming, though?

When it came to character there was several of them that were mentioned. Many of which made sense of being in the book however, some characters felt like they were just thrown into the book to add pages.

Firstly, you have the main character, Liz Lawson. Who isn’t a stereotypical girl but works on cars and hangs out with the guys. The whole story focuses around her and another character, named Shawn Ericson. She for a majority was a good character but there was instances within the book where she felt more like a cartoon than a real person which really could draw away you from the story.

The mom and dad complex was nice since you got to see parents being parents instead of being dead or cruel.

Then you have her friend Billy, who felt very micromanaging of the main characters life. He fancied her but took to it to an extreme and was even trying to make discussions for her which really crossed the line. He, also gave off a very weird vibe which I personally do not care for.

Then you have Shawn Ericson, the ‘dreamy, new guy’, who saves the main character. He surprisingly was a very interesting and complex character allowing for the book to have a more mysterious and complex theme/tone.

When it comes to the term of romance in this book. It felt somewhat like a small love triangle but I knew it wasn’t. But you do have two guys pinning after the same girl, who of course ends up with one in the end. However, it also felt like it was insta-love especially due to a couple scenes within the first 100 pages.

The pacing would have worked well for the book if it was all in dreams, or all in the school. Or even featuring one heavily over the other. It seemed though as if it was split directly half and half when it was in dreams and reality.

There was a heavy lack in diversity of really anything besides white, heterosexual characters which was disappointing

All-in-all this was an enjoyable book, a new concept, and a great two main character, however lack in diversity, and pacing.

Where To Buy The Book: 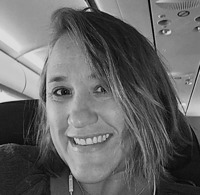 According to GoodReads, “Ann lives on forty acres in Northwest Colorado with two dogs (Ajax and Achilles), an ever-changing number of barn cats and her husband.

She enjoys writing about the Heroines Journey in the paranormal-fantasy universe, because writing about everyday life is boring. She loves taking a character who thinks she is weak and showing her how strong she really is.”

Where you can find Ann McCune:

In accordance with FTC guidelines/regulations for bloggers and endorsements, please note that all the books reviewed on this blog were either purchased by me or provided to me by the author/publisher in exchange for an honest, unbiased review and nothing else. I gain nothing in return for the review other than the book itself.

My reviews reflect my honest opinion and remain uninfluenced despite the Author through which I obtained the Knight Flyers.