Hello my fellow little munchkins. How are you all doing? I am doing okay. I had the lovely chance to interview two amazing authors: Holly Tierney-Bedord & Kelsey Ketch. They are both amazing ladies with great novels. I am having a lovely day as I am reading a novel while it is raining and isn’t that what every bookworm would want?

I have a question? What is everyones favorite color?

Anyways, why don’t we get onto the interviews.

What made you want to write this book?

Like many of the books I write, I had some names/characters and a “feel” for them, and I wanted to tell their stories. When I start writing a book, it’s as much about my own curiosity to discover these characters as it is about sharing them with the world. Rhonda, Carasine, Maggie, and Big Daddy (along with others in the book) were all in my head, amusing me and fascinating me. Writing a book means getting to know them better and learning what they’re all about. The writing process is like pulling them out of my head and putting them down on paper.

I’d tell my younger writing self that there isn’t one correct path. Some of my books were written quickly, some took years, some really represent my writing style, others were more about trying something new or experimenting for fun. As long as you’re having fun, that’s all that matters.

Have you ever had difficulty coming up with an idea for your story?

For the last year or so, I haven’t written as much as I usually do. This doesn’t really concern me. For years, I painted, then one day I got sick of it and quit. And I don’t care. Maybe some day I’ll want to do it again, maybe not. Same thing with writing. If, one day, I don’t want to write any longer, then I guess I’ll move on to something else. In general, though, writing has been a fairly constant part of me throughout my life. When I’m in the zone, I have more ideas and characters in my head than I can keep up with. I have dozens of partially-finished novels. Some will probably never make it to completion, but that’s okay.

While you were editing your book what were some thoughts that were going through your mind?

I look for inconsistencies, both in facts or a character’s behavior. I look for basic problems like typos, of course, and repeated words or phrases. Also, parts that stick in my head too much. If a line is really standing out to me, about ten percent of the time it means it’s that good, and ninety percent of the time it means it’s got to go. My rule is that, before a book is ready to be published, I need a clean read of it that I’m happy with. So, after I make my edits and corrections, I have to read it again. But then I’ll find so many more things to be changed that, by the time I’m done with that new set of corrections, I need to read it again. By the fourth or fifth time I’m rereading it I want to chuck my computer against the wall. But still, I feel that knowing what you’re putting out there and having it as polished as it can be is really important.

I don’t usually bother writing unless I have several hours so I can get into it and focus. I like to be quiet, comfortable, and alone. I’m always considering trying to write in coffee shops or as part of a writer’s group, but I’m not sure it’s really for me.

What advice do you have for other writers?

Not much before I get started, but when I’m working, it’s constant. I google as I go though, pretty much obsessively. Thesaurus.com is my best friend.

When did you decide the you wanted to become a writer?

There were lots of things I wanted to do, but being a writer was always one of them. 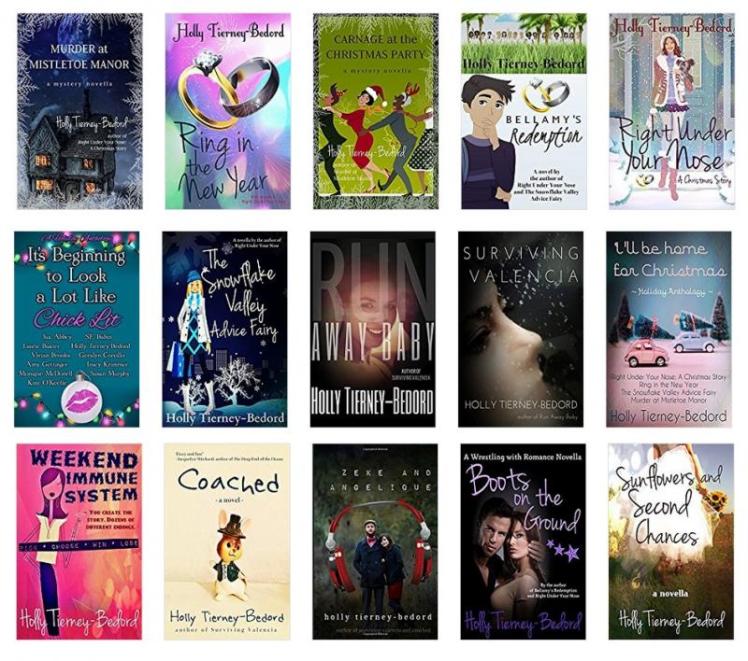 Carnage at the Christmas Party:
Book 2 in the Windy Pines Mystery Series

Right Under Your Nose: A Christmas Story

Ring in the New Year

What made you want to write the Descendants of Isis series?

For me, writing has always been an escape from reality. But just before the Descendants of Isis came into being, I had hit a dry spell. I had finished my first and second manuscript of a trilogy and was in the midst of getting them published. Unfortunately, the final novel was hitting road block after road block. I was frustrated, and needed something new. That’s when I had a dream about a boy, a fire, and a secret that wouldn’t get out of my head. Finally, I just started putting all my thoughts for the first Descendants of Isis novel down on paper until finally the boy grown into the character, Seth, and the secret, I realized, was the secret name of Ra. At first, the Descendants of Isis was just a distraction from my failing third manuscript of the other trilogy. But as I weaved more Egyptian mythology into its pages, it also became a way to share my own discoveries of the ancient culture, beliefs, and daily life within an intriguing modern, young adult romance and adventure.

What word would sum up your series.

What Hogwarts house would the main character of your series be sorted into?

With her natural intelligence and gentle heart, Natti would be sorted into Ravenclaw. She’s protective of her friends and family, and has low tolerance for bullies. However, when it comes to protecting herself, she tends to panic and freeze. And when she is forced to face anything she can’t logically explain, she often rejects it completely. This includes her own destiny that links her to the Egyptian goddess, Isis. In addition, with her love of sports (particularly tennis), she would also be on the Ravenclaw Quidditch team, most likely as a Beater or Chaser. One day, she might even make Captain.
Seth’s bloodlines, behavior, and personality would land him in Slytherin. The men in Seth’s family were all from a pure line that ran back to the priests of Set, and Seth, himself, is being groomed to become the next high priest for their god. He’s selfish, cunning, conniving, and uses his magic to get exactly what he wants. Fortunately, after meeting Natti, he puts his magic and skill to better (yet still selfish) use—protecting Natti from his father and his followers. Seth would also be on the Slytherin Quidditch team as the Seeker. Though he does have awesome skills at the sport, his participation is mostly about status among his peers.

When did you first start writing?

I dabbled in writing throughout my life. But it wasn’t until summer 2003, between my sophomore and junior years of high school, that I started writing my first full manuscript. After nearly eight years of research, writing and several rewrites, that manuscript is now my most recently release. My first novel in the new adult genre, Death Island.

Research is one of my favorite parts of writing. I truly love discovering new things and sharing them with the world. It’s my life passion, and sometimes, I can get completely lost in it. There are times I even have to draw a line and tell myself to stop. Otherwise, I would never get any writing or publishing done.
My research into each book may include—depending on the novel and time period—using Google Maps for locations, settings, and road trips; non-fiction books for history, mythology, flora/fauna, or other topics; documentaries on historical events, architecture, ancient daily life/afterlife, or theory; online articles from National Geographic, History, and Ted-Ed; and if possible, visiting historical sights, or at least, museums that contain materials I need to see firsthand to describe.

How long on average does it take you to write a book?

The time it takes me to write a novel is very dependent on two things: the research and my work schedule. With the research, the amount of time it will take to write a novel will depend on how much information is available. An example would be the ancient Mayan civilization vs. the ancient Egyptian civilization. There is far much more information available about ancient Egypt’s culture, while much of the ancient Mayan culture is still very much buried in the jungle, still waiting to be discovered. This makes digging for information and details difficult and requires more research time.
In the case of my work schedule, I have a day job as a biologist, which means I travel the state and alternate between field work and office work. Because my day job hours can vary depending on the season or project, most of my time for writing is during my lunch break, after work, and weekends—when I have time. However, to try to save time, I also overlap my writing work, basically writing or publishing one novel while researching the next novel in line. This helps me time manage, allowing to always be working on writing, one way or another.
Thus, if I separate and average the time each novel takes, I’m going to say three to four years.

How can your readers discover more about you and your work?

Readers can learn more about me and my work by visiting my author website at http://kelseyketch.com. There, I post about my research and my novels as well as the cover reveals and promotions of other authors who write about similar topics and/or genres. Readers can also learn more on my Goodreads and Amazon author pages or any of the following social medias.

Don’t let your fear and doubt hold you back. Just keep writing and publishing.